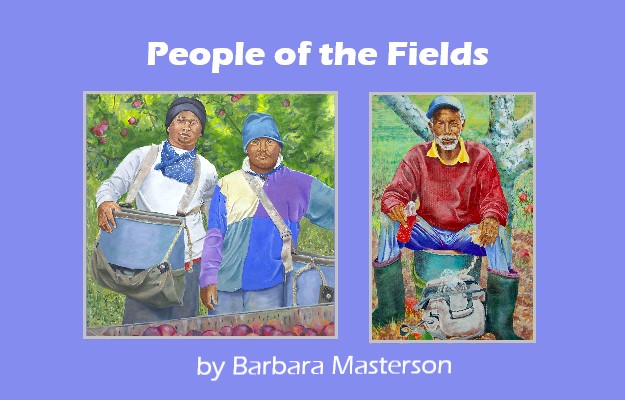 Barbara Masterson’s exhibit, “People of the Fields,” will be on display from June 1 through July 14.

In 1971 Barbara graduated with an AAS in Fine Art from Elizabeth Seton College, received her bachelor’s degree in Art Education in 1988, and her Master of Art in painting in 1990 from SUNY New Paltz. She studied the figure with Franklin Alexander at Barrett House in Poughkeepsie and in Woodstock. Barbara studied with Mel Stabin and Christine Debrowski. In 2002 she studied with Gale Barnett in Giverny, France. She taught art in the Newburgh district teaching the advanced painting classes, the AP art classes at Newburgh Free Academy until her retirement in 2014. Her main influences include Monet, Edward Hopper, Windslow Homer and Michaelangelo. She has been painting her entire life.

In late May of 2015 while painting en plein air on a local farm, Barbara began adding the migrant workers to her work. At first they were faceless figures in the fields. They became prominent in her compositions; the figure becoming large/cropped.  These workers are some of the “faceless” people that impact our lives. These workers often remain unseen and unknown despite their presence in our Valley for many months each year.  Getting to know and then paint them has transformed Barbara and her work. Her large-scale drawings and paintings have transitioned to portraits of the men and women in our society that are invisible.

She is a member of Arts Mid-Hudson, Barrett House Galleries, Woodstock Art Association, Katonah Museum of Art, and Garrison Art Center. She was one of the founding members and past president of The Real Gallery, an artist cooperative in Cornwall, NY that existed for 20 years.

She has had work in the Woodstock Museum of Art, Woodstock, NY as well as a solo show in 2016. Her work has been in the Katonah Museum in Katonah, NY, Mattatuck Museum, Waterbury, CT, and the Hammond Museum, North Salem, CT.  Since the development of this body of work she has had several regional solo and group shows.­

In May of 2019 she received a $2500 Individual Artist grant from Arts Mid Hudson to continue a series of large scale drawings of the workers including text.