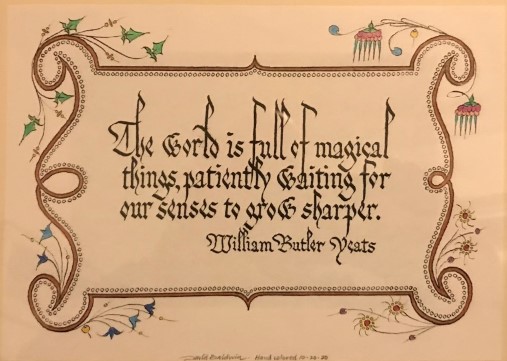 David Baldwin’s exhibit, “The Framed Word,” will be on display in the Library Community Room from July 21 through August 31.

David Baldwin has been an active calligrapher since high school. He starts every morning at his drafting board, composing his works of the day. Mr. Baldwin was self-taught until he studied with John McCrillis at Yale University. He has had many sponsored shows in the Minneapolis/St. Paul area, but this is his first show in New York. He has been a member of the Colleagues of Calligraphy in Minneapolis, MN.

Mr. Baldwin, a native of Alliance, Ohio, obtained an undergraduate degree from Baldwin-Wallace College in Berea, Ohio and his Master of Music, Master of Musical Arts and Doctor of Musical Arts in trumpet from Yale University in New Haven, Connecticut. At one point in his career, he was a member of the West Point Band under the direction of Colonel William Schempf. He went on to serve as Professor of Trumpet at the University of Minnesota in Minneapolis for forty-five years, where he is now Professor Emeritus.

Mr. Baldwin and his wife Christine, a Cornwall native, returned to the Hudson Valley in 2019 to be close to family and enjoy the abundant beauty of the mountains and river. He is an avid hiker and has even been known to play his trumpet on top of the local mountains. Mr. Baldwin is honored to play “Taps” for Cornwall’s ceremonies on Memorial Day and Veteran’s Day.